Good evening, 2 x Fish and Chips in a week, not bad Mina!  Here we are at The Bohemia.  I remember that I was impressed by beer but not fish and chips previously. 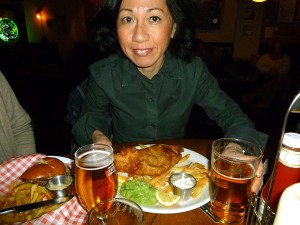 Damn! Forgot to take my usual shot with a pint! Fish and chips is already here!

Oh well, I had a same beer – Shremser Pint 4.0%, £3.95, again, as it was before this was well served, cool pint! Yey!.  My fish and chips was described as “Beer  Street battered fish & chips, tartar, lemon. £10.95”, nice simple description.  By the way, why the menu font is so tiny, with this darkish lighting (and our age….) not easy to read, took us (not me but others) ages to decide what to have, simply because everybody struggled to see what was on the menu!!!! 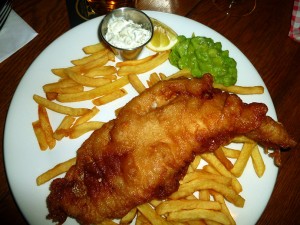 I know why, as previously, the plate was full of french fries but not chips, this is a big deal!

1. Fish 5/10.  Same as previous visit.  I want to give exactly same comment, not need to add or change anything!  However, there is a consistency here, though not in the good way obviously, shame!
2. Chips 5.5/10.  This is not chips.  This is french fries.  Slightly better executed as oil was drained better than the last time.
3. Peas 5/10.  At least peas were there.  But nothing special, average of average.  No twist whatever, could do some mint or butter or whatever, surprise me!

Overall disappointing 5/10 (giving slightly better mark for peas and less greasy french fries).  You obviously did not read my comment, thought I was a famous and influential fish and chip critic.  How disappointing!