This is a Fish and chips critic special report from Glastonbury 2015.  Being in the UK for the past 23 years but this is my very first Glastonbury.  There are numerous reports from Glastonbury, therefore, I decided to highlight the one aspect.  How big the festival site is by,

I am determined to spot all fish and chips on the site.  Then I was greeted by: 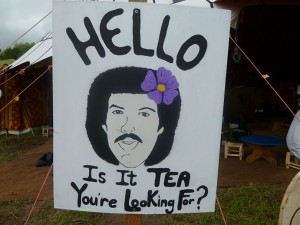 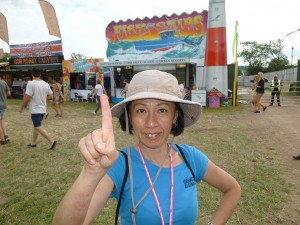 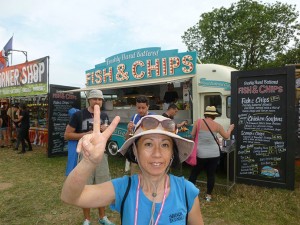 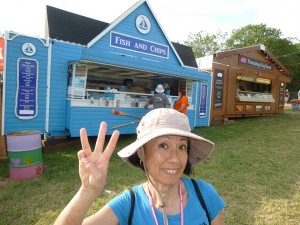 No.3: Cod and chips hand buttered fish served with mushy peas, tartar sauce and wedge of lemon £7.00, Good attempt to pretend being at seaside in the middle of Somerset. 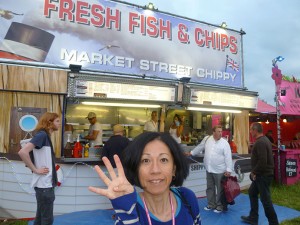 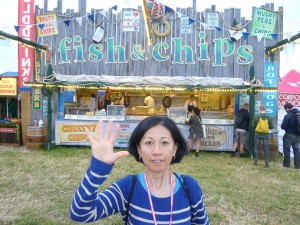 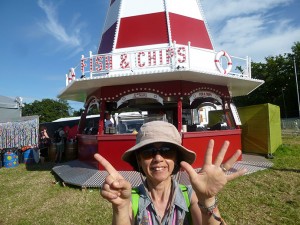 No. 6: Fish and Chips, freshly beer battered fish served with golden chips £7.50.  This was very tall shop shame this photo did not capture it. 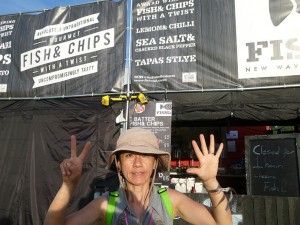 No. 7: The shop was closed for 1 hour, it was 8pm Thursday, prime time! What were you thinking of!!! 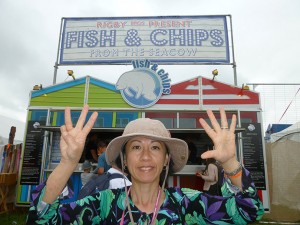 I spotted impressive EIGHT fish and chips.  I hope this result portrays how big the site is.  Though according to the on site “The Glastonbury Free Press” newspaper (yes!), there were 513 food stalls at the Festival, selected from a total of over 2,000 trader applications.  If I did spot all fish and chips (I am pretty confident I did) then the presence of Fish and chips is mere 1.6%.  From my impression the biggest presence was PORK, either in pulled pork or hog roast form.  I must confess I did not sample any fish and chips on this occasion.  I was too busy eating other foods from rest of 505 stalls!

On Monday morning, we chatted a stall holder (not fish and chips).  According to him, electricity cost him approx £2,500.  He was near the Pyramid stage. Though he is in the prime location.  However, he told us that trade peaks during performance hours but after the last act it disappears.  Ah! of course!  the area probably be the quietest rest of the night (which never ends).  Also he told us that the first 2 days are usually quiet as people bring lots of own foods….

Nevertheless, 2,000 trader applications told us how desirable to be at Glastonbury.

I cannot rate fish and chips.  But I can rate Glastonbury Festival.  I give my solid 10/10,  What a party, I never knew this world exist,  I wish I was there earlier.  I was missing out big time.  Had been apprehensive about toilet, not be able to wash, mud, etc.  How stupid I was, these things did not matter.  I did not have a shower for whole 6 days while I was there, did not bother me slightest.

All over for now, the food stalls were all packed up by 6pm Monday night (so the trader above told us) until next year….

I will be back Glastonbury! 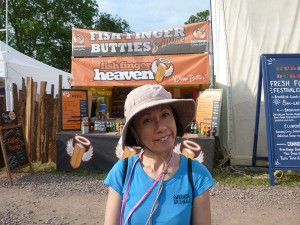 By the way, I spotted fish finger stall x 2.  I am so not sure about them, we all know fish fingers comes from boxes, a bit cheeky selling as if “special” food….