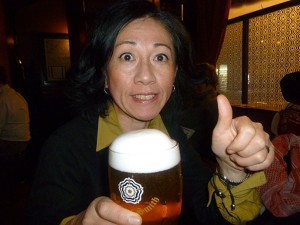 I think their beers are generally good, however, my friend, @PrinceRupert007 describes his cider “suffering from severe diminishing marginal utility of satisfaction”…….whatever…….he said his cider was not good and told that to the nice barman! Harsh!!!!  Though surprisingly (or not), he didn’t seem mind.

There were some OAP’s making happy noise in downstairs though upstairs is quiet and nice dining area.  We moved on to the upstairs for our Fish and Chips. 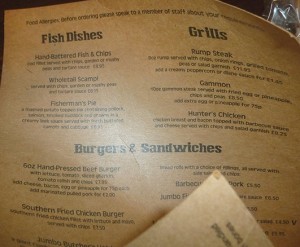 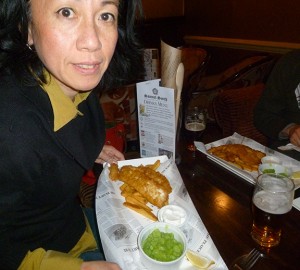 First impression, a small portion. This may be an OAP portion. Understandable, you must target to your main audience. 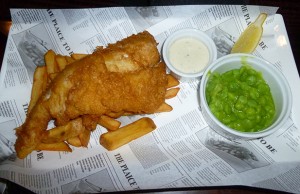 Served on a paper which is mimicing newspaper.  I understand you would like to create “traditional” feature.    Unfortunately, your intention was not achieved.  This is a bit naff!

1. Fish 7/10.  Not bad at all, perfectly executed, fish was moist and cooked through, I had a good feeling this is fresh, not frozen.  Batter was nothing special, then again, you could say “traditional”, no strange herbs or any funky twist which quite frankly, not necessary.

2. Chips 5/10.  Ah, they were lukewarm!!! Shame as they were not bad chips but I must reflect this on the score.  Nobody expect lukewarm chips in a cold winter night at a cozy pub!

3. Mushy peas 3/10.  Yes they was mushy peas as it says on the tin, this was without doubt, straight from the tin.

I must highlight, the lovely waiter asked me if I would like an “extra” sauce upon ordering.  I asked for mayonnaise.  Then, I received mayonnaise INSTEAD OF tartar source.

Overall score 6/10 for good effort.  I did not suffer from severe diminishing marginal utility of satisfaction, for sure.