Good evening, nearly end of the year again.  December is the time to meet up with friends and we are here AGAIN, at St. Christopher’s Inn, London Bridge. 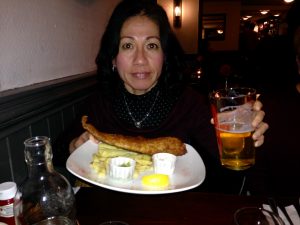 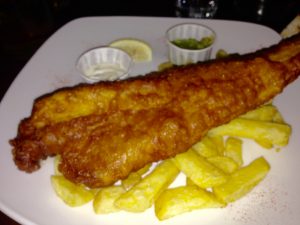 Shocking!!!!! We were 4 of us.  All of us ordered Fish and Chips.  When the first 2 arrived, as a waitress brought dishes down to the table, I and one of other friend who was sitting next to me, both smelt very strong “off fishy” smell.  We both knew that smell, “rancid” fish smell.

Shortly after, the other 2 dishes (including mine) arrived, but I did not detect smell then.  When my friend had a first bite, she declared “I am not eating this, it tastes sour, I have never taste fish being sour”.  We, all four of us, cut open fish, and smelt each other’s fish.  We decided to send all the dishes back.

Lovely waitress (we were never shooting messenger), sincerely apologised. She then said chefs throw away the box of fish now, and opened new box (must be frozen, as I pointed previously), so they can cook from fish from the new box.  We declined.

Chefs must knew.  You cannot ignore the smell.  They chose to disguise rancid fish in deep fried batter.

How disappointing, how insulting.  I am rating here 0/10.