Good evening, one of the best Friday of the year, yes, it is a Friday before Bank Holiday.  Fish and Chips with pals seems the best way to start this long weekend.  Here we are at The Ship Tavern, situated in a little alley behind the Holborn tube station. 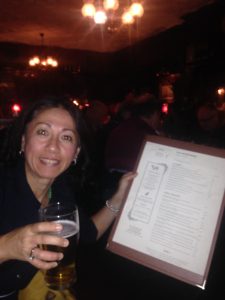 Apparently this place is famous for its Gin collection but beer was also well served too! 10/10!

I have a high hope.  Some years ago, I had a “roast turkey baguette” at Christmas time.  I remember this was massive baguette sandwich with roast turkey, cranberry sauce and staffing.  And, it was surprisingly delicious!!!  Since this place was one of my must fish and chips visit list.  Previously we ate in the down stairs bar.  Then tonight, we decided to venture to the upstairs as the table in the bar was too small for 4 of us to have meals.

OMG, how could we have guessed?  The upstairs of this old/working people friendly pub is like an old, traditional British dining room, and one of the peers of this evening described “like the oriental express”.  And the pricing reflect this setting, “Fish & Chips garden pea puree, tartare £17”.

SEVENTEEN pounds.  This is the most expensive fish and chips I ever ordered.  Also, even in the bar downstairs, it is £17.  Ah! this is not reflecting the poshed-up dining room.  This is simply “just expensive”. 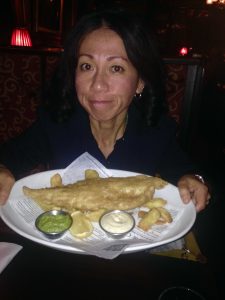 First impression: not £17 looking, I have seen this style of serving before.

Fish and chips served on “mock newspaper” to replicate the chippie is OK.  After all, it sucks excess oil, but not in the “oriental express” for £17 paying customers. 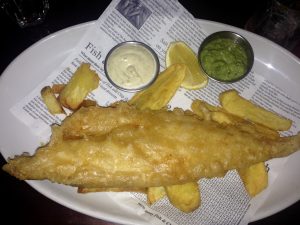 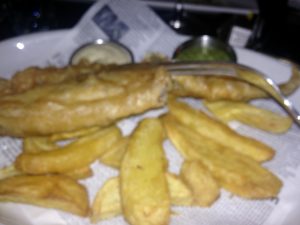 Fish 9/10 : Actually delicious. Fish was well cooked though, no raw bits (I found this is all too often) but still juicy and fluffy.  Batter was simple, crunchy, integrate well with fish (with skin, of course) in the mouth. The negative was my fish felt slightly thin fillet, but this is probably my bad luck as others looked nice fat pieces!!!

Chips 9/10 : Again, delicious.  Thick cut chips were not greasy (despite hiding under fish) but crunchy, piping hot, fluffy inside, tasty potato flavour.  The negative is the portion size, I could eat at least 5 more chips.

Pea Puree 8/10 : Delicious again.  Some hint of butter and mint but not at all overwhelming.  In fact, the combination was perfect so that sweetness of the peas were enhanced.  Again, small portion size is the negative and this was not exactly puree.  Puree is without bits, I personally think this term is over used in the food world.

Overall score though 6.5/10.  How, anyone can justify £17 for Fish and chips.  Also what do you expect for £17 other than well, deliciously cooked fish and chips.  We couldn’t get over the fact we are paying so much while we were eating, which, if we were honest (I use “we” as this was group consensus), spoiled this dish a bit (don’t confuse, we had a great evening).